< back to main page
CHAPTER 7

What needs to happen for DisCOs to grow and flourish across the economy? This is the purpose of the DisCO Project: to provide educational tools and experimental spaces for the ongoing, transnational development of DisCO. It’s an undertaking that needs ongoing support to reach a broad base of potential advocates and participants.

DisCOs are designed to be developed from the bottom-up. To create the desired cooperative economic counterpower, they will need to find each other and network through agreements. Supportive legal and policy frameworks would greatly enhance some of the potentials described in this publication. As explicitly political and federated initiatives, DisCOs also act as a training ground for deliberative, inclusive decision-making processes, preparing members for responsible civic action. In this way, DisCOs could act as pilots to prefigure new forms of policy around networked politics.

Given DisCO’s transnational orientation, the following recommendations are general and non-domain specific. Individual DisCOs and federated DisCO networks need to actively campaign for legislative change at various levels in applicable jurisdictions. Additionally, the objective is for the State to provide the necessary infrastructure to empower and protect the creation and upkeep of DisCOs, but not direct the process of federated DisCO development.1

Arguably, the development of DisCOs centered on ecologically and socially-oriented work can directly address urgent crises at their root, radically democratizing social and public health provision and large infrastructure management and upkeep. This lessens the need for costly post-hoc state interventions and brings a more democratic distribution of economic power, alleviating government enforcement of redistributional strategies through taxes or benefits. 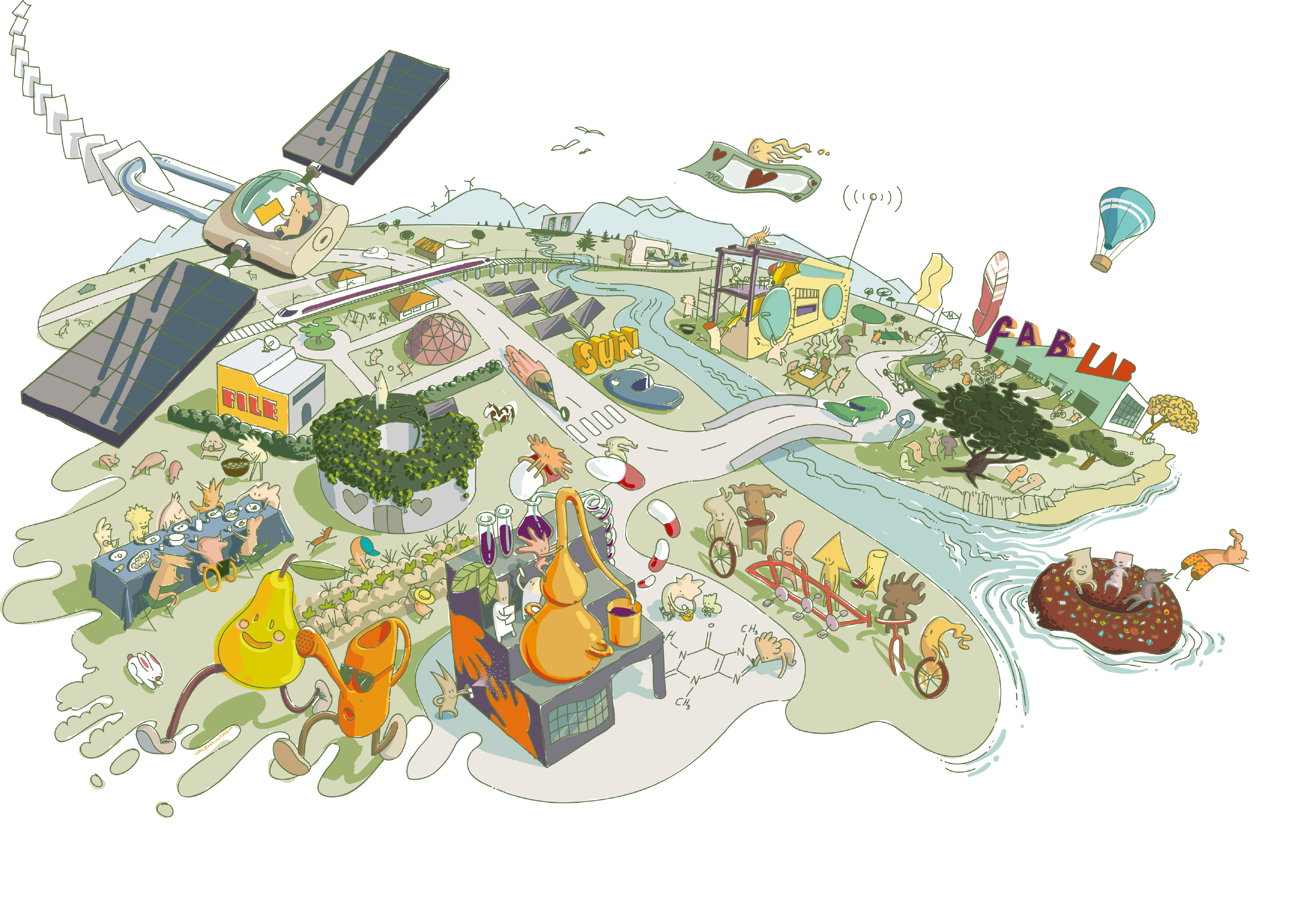 To support these goals we propose that states and municipalities enable DisCO development through:

1. The provision of special economic incentives for DisCOs, implemented as:
a. Tax benefits, including reducing the tax rate dynamically calculated against measurable social and environmental gains, social security bonuses for employing underprivileged or marginalized persons and more.
b. State-supported microcredit systems with demurrage based interest rates based on achievement of co-defined social provision goals. These can be delivered through cooperative banks, some of which may practice forms of DisCO accounting. State-supported social and crypto currencies are another possibility.
c. Direct financial injection and social investment through renewable, interest-free loans. These can act as seed funding for DisCOs and enable positive credit valuation.
d. Public subsidies towards DisCOs Worker Self Directed Nonprofits as a more democratic and mandate-accountable alternative to traditional NGOs.2
e. The monetary value of employee pro-bono work could be treated as a tax-deductible contribution to the non-profit coop.

2. The development of legal frameworks to provide DisCOs with appropriate institutional (i.e., State, federal) support to facilitate their operation and innovative accounting practices.

3. The development of commons-public partnerships3 as an alternative to the established public-private, following the Preston and Evergreen models, with DisCOs facilitating:
a. Municipal service provision for local economies.
b. FLOSS-built4 and open licensed, common-pool civic knowledge resources.
c. Practical workplace education on feminist economics, the commons, decentralized technology and the ethical market sectors offered by participating DisCOs.

4. Supportive municipal policies for provision or support for physical infrastructures for DisCOs, including hackerspaces, hackerlabs, maker and co-working spaces. Unused municipal facilities could serve as short- or long-term incubators for knowledge work, skill sharing and technology transfer, as well as for the development of new, federated DisCOs.

6. DisCO-oriented work training programs with DisCOs providing practical education in their specific sectors, as well as the DisCO methodology and tools. This would include transfer and acknowledgement of credits for higher education.

8. Support of DisCO initiatives as bottom-up facilitators of Green New Deal projects. Compared to normative public-private solutions, this would:
a. Disburse funding for GND projects more equitably and at a lower risk,
b. Enable substantial savings, absent a profit motive,
c. Bring the benefits of impact at scale through highly federated actors, focused on regenerative economies of scope, not scale.

9. Prioritization of DisCOs and DisCO federations over for-profit entities when capitalizing on products/services derived from publicly funded research, including healthcare and medicine, code and end-consumer products. This would ensure fair pricing, ethical application and open licensing.

Earlier we mentioned the first few DisCO LABS. At present a variety of additional DisCO LABS in diverse sectors such as the arts, textile recycling/reuse, permaculture, education, online marketplaces and medicine are presently being planned and launched. Research findings from these pilots would experientially validate DisCOs advantages and potentially facilitate policy uptake. Complementarily, there is abundant existing research on many of DisCO’s formative influences, such as multi-constituent social solidarity and cooperative sectors, existing Commons-public partnerships, the benefits/savings of FLOSS, blockchain/DLT experiences in record keeping and inventory tracking, can be included into DisCO-focused policy proposals.

DisCOs are designed to be autonomous in operation and not State-dependent. From a legal standpoint, cooperatives are private entities. But in the interest of long term remediation — social, economic, environmental — governments would be called upon to prioritize support for generative, restorative industries, and to divert funding and subsidies away from harmful, extractive and exploitative ones. If DisCOs, to paraphrase the IWW,6 aim to ‘build the new world in the shell of the old’, it must be acknowledged that the old world still holds vast amounts of power. The affordances of radical, prefigurative projects such as DisCOs will always be affected by the constraints of existing systems, including public policy.

What DisCO proposes is radical economic subsidiarity: distributed production and economies not of scale, but of multi-faceted scope. With the increasing awareness and discussion (even if divisive) of our many global crises, taking a stand becomes more important, collectively and individually. Covid-19 has required countless people to work from home, which has also raised many reflective questions on the purpose and effects of those jobs. For true change to happen we must first address the productive and reproductive spheres of work, the decisions about what we produce and why, and how we regard fairness in the way we treat one another. Lasting change can’t be predicated on individualistic patterns of consumption, but consider this question: as citizens (more than consumers), can we continue to support the exploitative labor practices of the ever-growing economic power monopolies exemplified by Amazon, or do we see ourselves capable of contributing to the revolution of work, as exemplified by DisCO?

While compatible with existing economic forms (i.e., co-operatives, the Social Solidarity Economy, etc.) and actively working to subvert the right-libertarian bent of most blockchain economics towards associationist ends, DisCOs also pave the way for decommodification and non-market exchange thanks to their commons orientation. They train us to resist and create capacity for whatever the future may hold.

Finally, DisCOs place a new and more empowered political subject at the center. Beyond the precariat, DisCOs exist to care for and reproduce commoners — understood as people in communities who steward their own resources according to the rules, norms and values they set for themselves. With the sustenance of 2.5 billion people depending on natural resource commons and an abundance of commoning practices taking place in digital spaces, mutual aid groups, food production, cohabitation and fablabs and makerspaces, the logic of commoning is evident in the ongoing Covid reality. DisCOs catalyze these practices into a feminist economic and care-oriented framework, paving the way for pervasively sustainable commons-based alternatives to the dominant order.
Wild facts and habit fables. Creatures, imaginations and impossible worlds. In this video feminist scholar and all around badass Donna Haraway shows us how Science Fiction is a “critical germ/seed and point of eruption” towards better futures.
As Ela Kagel wrote in her Foreword, many pages ago: It ain’t easy. Take the power back, stay with the trouble. Let’s build tracks together towards a future of care. It may be our only chance.
“No Experience Required”
Afterword by Ann Marie Utratel

‍I’ll keep this brief. If you’ve read some or all of this publication or its predecessor, the Disco Manifesto, it might seem like information best used by people with specific experience or expertise in fields like human resources, academic research, economics, organizational psychology, project management, accounting, team building, software design, cooperatives, or any of the other fields that may have been mentioned or implied. I don’t think that’s the case.

The teams we’ve helped build and work with do have members with specific expertise, but they also have some people – like me – with far more general experience, and perhaps even several careers in their past. When I say “no experience required”, what I mean to do is remind you that in some moments, it’s more important to take a beginner’s approach and see what you can do with some new ideas. To someone who may be working from home now during the up-and-down pandemic crisis, I’d say try our time-tracking advice and understand where your precious hours go. If the research I’ve been reading is helpful to mainstream corporations, it’s helpful to you too: reports say that people are often more productive working from home, for a few reasons, one of them being that they’re simply spending more time working. Why? In my opinion, it’s possible that people don’t know when to stop, don’t have good boundaries yet, and don’t feel like they’re seen as “doing enough”. That’s not going to be sustainable in a shifting work-life balance full of new expectations, but it’s better not to rely on feelings or impressions. Capture your own time-tracking data and see for yourself. To someone who has a less secure position, or who is trying to move their side hustle up to the main focus, I’d say: consider if you might want to form a small, trusted team, make it a cooperative and share the workload as the side gig grows. Can you implement some mutual support practices? Are you interested in tracking care work, and opening discussions about how everyone’s work is valued?  Can the team make decisions together and bring everyone’s strengths forward? What about creating something to share in a community you belong to? Building an information or material commons is another step towards changing how we share and create together.

All of the DisCO Principles and Values can be interpreted, adapted and implemented at a very small scale, and every step counts. If it seems like you’d need to be a multi-titled expert to take this on, let me debunk that right now. Cooperation doesn’t depend on titles, it depends on attitudes, goals and care. We care about the future, and we offer these ideas so that you can take inspiration and hope from them, starting exactly where you are right now.

We’ll be here if you need us. Take care.
< back to Chapter 6
1 How much should commoners be working with the Market/State? Here is our take on that subject: Commons in the time of monsters: How P2P Politics can change the world, one city at a time.
2 Guerrilla Media Collective is constituted as a non-profit and socially oriented worker owned cooperative legally registered in Andalusia, Spain.
3 For more on Commons-Public partnerships (the order of words is important) see this report by Common Wealth.
4 FLOSS” stands for Free/Libre and Open Source Software.
5 On-chain and Off-chain are terms used in the DAO space to distinguish algorithmic based governance (On-chain) from human agreements (Off-chain). We argue that the very dichotomy of off/on-chain elevates the blockchain as the primary focus of attention, subordinating social practices. In the DisCO Manifesto we argue that everything occurs “onlife” where the corporeal dimension and human and environment needs precede all other considerations. For a simple description of On-chain/Off-chain governance, read this article.
6 Industrial Workers of the World. Click here to visit their website or here to read their history.